The history of the name / A história do nome

The history of the name

The history of the name of "CASA PALISSY GALVANI" is intrinsically linked to the history of the research and development electricity and on electrical applications, observed through the eyes of an entrepreneur who was founding a company in 1895, with the main goal of trading "electrical equipments". 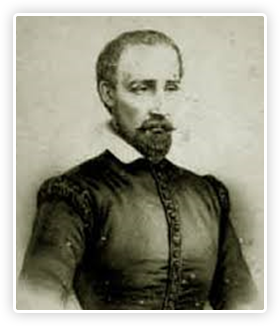 ​The Electricity in Portugal

It was only in 1878 that, by request of the Royal Family, the first arc lamps were imported and installed at the Citadel of Cascais, to celebrate the birthday of King Carlos.
Next, the electrical street lights reached Chiado, the fancy city center block and S. Carlos Theater (1886) was the first to have interior electrification, followed by Arsenal Marinha Grande (1887) and a few others. It was only in 1891 that the first public lighting company in Lisbon was born, based on the fusion between Companhia Lisbonense de Iluminação a Gás and Companhia do Gás, under the name CRGE – Companhias Reunidas de Gás e Electricidade, with the right to produce, distribute and sell gas and electricity for public, domestic and industrial purposes in the Lisbon area.

The Casa Palissy Galvani was established in 1895. It was working with the latest technology. It was normal thatit would seek a trade name that would honour, according to its founder, the people who led to the use of this new form of energy, which was completely revolutionizing the way and the quality of life of Mankind.


The choice focused on Bernard Palissy and Luigi Galvani.

The first one, ceramist of the 16th century, passionate student of nature, natural sciences and the origin of fossils, lived obsessed with perfection in the production of ceramic glaze, causing him to endanger the survival of its own family. He was later adopted by Catarina De Medicis and taken to Paris where he developed his studies and created the "Palissy" style with the introduction of animals and elements of nature in the decoration of his artworks (see Facts). His studies influenced the glazing ceramic technique and its durability.

Luigi Galvani (2nd half of the 18th century) was a physiologist, physician, researcher and professor of anatomy, among other scientific activities. It was during anatomy experiments with frogs that he concluded that the electric current had origin in animal muscles. He discovered the "bioelectricity".

It is important to note that in the 18th century several scientists (Von Kleist, Leiden, B. Franklin, Priestley, Coulomb, ...) worked and studied electricity, but essentially in the static electricity field.

Not being a physicist, Galvani remained intransigent on the uniqueness of his theory, making another scientist, a well known physicist, to prove that it was not only through organic tissue that electricity was produced.

The well known physicist was Alessandro Volta. In this quarrel he created the first source of electrical energy, reliable and stable -a voltaic pile, or simply a battery.

Galvani’s influence on Volta´s investigation was considered so important that his name is connected to the "plating" process.

But there was another being that was honored by the founders of Casa Palissy Galvani - the FROG.

The key element in Galvani´s experiments was immortalized in the company logo. 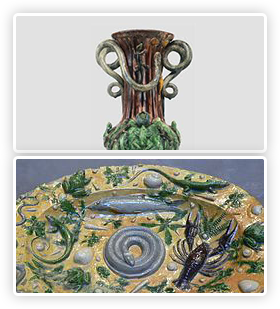 It is around 1820, with Maria dos Cacos (? -1853), that, according to several authors, starts Caldas tradition of "art pottery" that will make the region one of the main ceramic reference in Portugal. After her, others have followed: Manuel Cipriano Gomes ("O Mafra") (1829 -1905), José Alves Cunha (1849-1901), Francisco Gomes d'Avelar (1850-1918), Rafael Bordallo Pinheiro (1846 -1905) and Avelino Soares Belo (1872-1927), all embedded in a naturalist chain strongly influenced by the french pottery work of Bernard Palissy (1510-1590), which is the subject of revival in several European countries, including France, England and Portugal, in the second half of the 19th century.
“O Mafra” to whom it was authorized the use of the crown by the Royal House, was called “the Palissy das Caldas” by the Inquérito Industrial in 1881.


Most of these ceramists created their own factories, but the one that will become the main reference in 1884 will be the Fábrica de Faianças das Caldas da Rainha (FFCR), with its artistic director, Rafael Bordallo Pinheiro, that reached notoriety to the present day. He will be responsible for the continuation of this naturalist chain and simultaneously for the introduction of new forms and references.